More of my shots from my recent photo shoot can be seen on my website in the gallery Boreas & Guanella Pass 7-24-2009 if you would like to see more than what I have posted below.

This past Friday evening I had the chance to venture out with my shooting buddy John (his work can be seen at Glitch-Chaos on deviantART ) and headed for some late day and evening shooting up at Guanella & Boreas Pass here in Colorado. I figured seeing as how we would be driving through the Ghost Town of Como to get to Boreas, it would also some great shots as well.

It is wildflower season in the high country right now, and we wouldn't be disappointed! The waterfalls and creeks were flowing heavily and made for some wonderful shots. Around the Guanella area, these are a sort of highlight for me... Guanella Pass sits at almost 12,000 feet high and runs between Georgetown and US285...it is easily passable in any car with parts being paved. At the summit of the pass, trails lead to Mt. Bierstadt (el. 14,060 ft./4285 m.) Shooting here is a really worth your wild experience, and late day light is very dramatic....and lead to some pretty sensational photographs. So without any delay, here are a few shots from Guanella Pass... 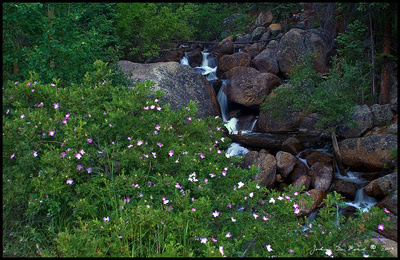 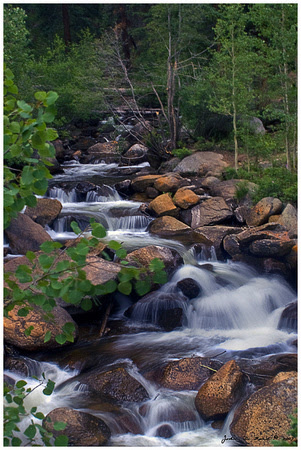 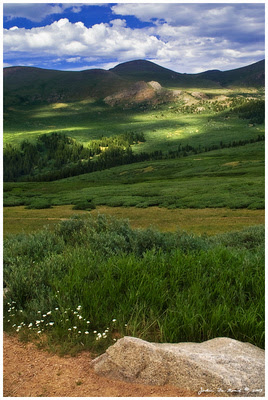 The Ghost Town of Como Colorado

While some may not consider it a Ghost Town in the traditional sense, I sure as heck do! There are still a handful of people who live there, but honestly, there are more empty buildings than there are people....and it makes for some GREAT shooting! Even the original outhouses still stand from the 1800s...it is like stepping in to a time warp....where time just simply stands still,.....a glimpse at how life was back in the wild west.

From the Wikipedia article on Como, Colorado:

Como is an unincorporated town and a U.S. Post Office in Park County, Colorado, United States. The Como Post Office has the ZIP Code 80432.[2]

Located at the northern end of South Park, the town is a historic mining settlement founded during the Pike's Peak Gold Rush in 1859. It sits approximately one-half mile (1 km) north of U.S. Route 285, approximately 9 miles (15 km) northeast of Fairplay. It is accessible by an unpaved county road off Highway 285 leading northwest over Boreas Pass (to Breckenridge) in the Front Range. The mountains northwest of town form a dramatic background to the town site, which sits on the flank of Little Baldy Mountain. The town was named by prospectors and miners from Como, Italy who came to work the gold fields of the area.

In 1879 the town became the location of a roundhouse of the Denver, South Park and Pacific Railroad, which was extended over Kenosha Pass to reach the silver mining areas during the Colorado Silver Boom. The roundhouse served as a junction for trains going northward over Boreas Pass and southward toward Fairplay and over Trout Creek Pass at the western end of South Park. The town has many historic weathered structures, including the roundhouse, and has the air of a ghost town that is still nevertheless populated, by 500 people. It has a small commercial district just off the main county road consisting of a post office and general store. The roundhouse is currently under renovation with intention of turning it into a principal tourist attraction in the area.

What it doesn't tell you is all the people who died here, there was a mine collapse that claimed more than 25 peoples lives....there was also a massacre of Chinese mine workers in Como, in which it is estimated 100s died...due to the Italians and Irish at the time, disputing how the Chinese were paid lower wages and feared losing their jobs because of it.

But as I said it offered many photo-opps! Here are some below: 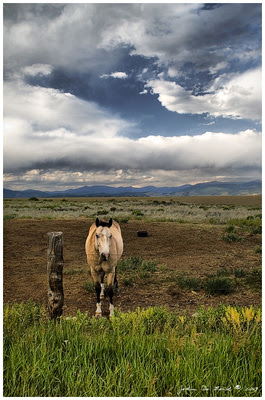 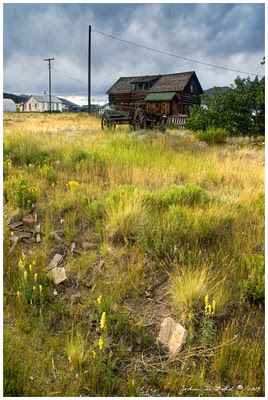 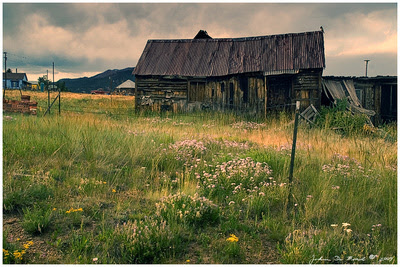 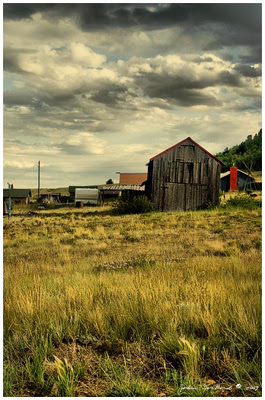 Honestly this is one of my favorite places to shoot at, there is just a real lack of people up here and noise, it is almost eerie, like you are the last human on the face of the Earth. It starts at Como and comes into the backside of Breckenridge, and has some utterly amazing views along the way. It is a great trip to make, and the wildflowers are just amazing.

We arrived here at Golden Hour and went to town, stopping often to catch the dramatic light as it bounced off the rain clouds, with teh sunlight filtering through, it made for unreal conditions to shoot in. It was quite challenging at times actually, with trying to shoot with my tripod with a bum knee, and at times I just hand hold the shots, but I was able to get some pretty amazing shots off thanks to in body anti-shake in my Minolta!

The wildflowers just littered the road up here, they are literally just everywhere, and the scent they produce along with the smell of the rain, is nothing short of absolutely heavenly! It really is something out of a film, or movie, that you experience. So journey with me on this adventure to Boreas Pass! 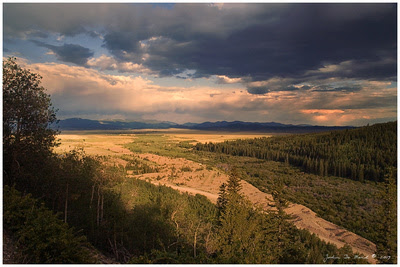 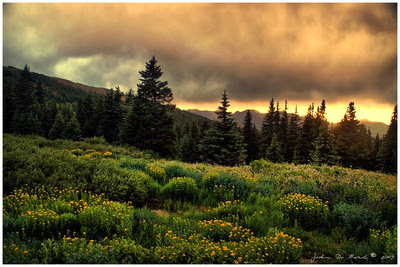 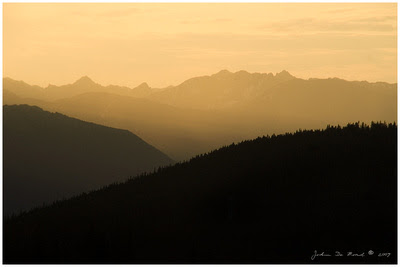 The Inner Battle Among Photographers

Before I write this, I want you to all know where I am coming from. I am a Gallery Moderator on deviantART for Photography-Animals, Plants, & Nature (think basically, Nature Photography) I interact with literally thousands upon thousands of people, sometimes on a daily basis. And it is with that interaction that I started to notice a few things amongst my fellow photographers.

It almost seems there are 2 camps within nature photography, these who believe in capturing the image exactly as you saw it, and those who get a little creative with their images...maybe doing subtle HDR work, de-saturating images, and so forth. Oddly I have found it is the later, the creative camp, who is more likely to do B&W work, but anyways....

What I have come to notice is a BIG chip on the shoulder coming from the the "The eye crowd" as I call them, towards their creative brethren... and it often gets pretty heated. It kind of leaves me scratching me head honestly, wondering why so many feel this way, feeling the need to outright openly and attack others because they feel an image is wrong....I kind of wonder where the respect has gone.

Is it possible to even have a "right" or a "wrong" within a creative medium? I am not to sure of that. No 2 photographers are going to capture things the exact same way, and who cares if one shot has more post work than the other, in all honesty. I think without question, we all view things the same way when we take the shot, regardless if one photographer decides to go with a B&W and the other one replicating the scene the best as they can to the human eye....we are all photographers....

So what is causing these attacks and general disdain? That is what I would like to know myself. Now I don't mean to be offensive here, but honestly, there are a million and 1 cookie cutter waterscape shots that all look the same, long exposure, at sunrise/sunset, etc. And often, oddly, these folks attacking the more creative ones, their shots all look a lot alike. I honestly to God can not tell who shot what....is that a slam? I don't think so as much as it is an observance of a possible pattern. I honestly like their work, but at times, I can't tell who shot what...

Myself, I think I ride the fence a lot between the two camps, sometimes I take shots with a more creative workflow in mind, other times, I capture it as realistically as I can...needless to say, some of the comments I receive are well...."interesting", I will say that. That being said though, I have worked long and hard at developing my own style, and maybe that is what needs to happen....I remember an old quote that goes something like "People put down what they don't understand"....I guess those words really ring true, especially these days with what I have seen.

Anyways, here are a couple shots from this past Friday evening that I took up on Guanella Pass & Boreas Pass here in Colorado...stay tuned for a formal blog post about that, in the days to come!

Posted by The jdebordphoto.com Photoblog at 9:07 AM 4 comments: