I thought that I would take a second and write this in hopes that maybe it helps some of you out.
Each and every year we see a lot of people write what basically is "make the most for your Fall photos" with hints, tips and tricks and what I have noticed is that much of it is the same. Polarizers, tripods, etc etc. So I thought that I would show you a little glimpse into how I shoot things. Granted, tripods and polarizers are certainly a mandatory affair. No questions asked there.

When it comes to shoot foliage such as Aspen trees and such, I think my method is probably different than a lot of peoples. This is aimed at shooting more intimate scenes, not sweeping landscapes, though it certainly can me used for that however I would say it really is dependent upon the scene itself (then again isn't everything?) Basically I start with an image that I can later correct in post work. I pretty much use Lightroom for everything these days and Photoshop only for resizing and sharpening, along with layer masking when it is called for.

When I am shooting an intimate Fall scene, I generally choose the preset of "Sunset" for my white balance on my Sony A550. I also generally underexpose by 1/3 to 1/2 a stop. Depending upon the lighting, that can drop down to much as a stop. There are a few reasons for this and for me, personally, this is one of the rare times I don't ETTR (Expose To The Right) Highlights can be easily blown within foliage especially when it comes to a scene which involves backlighting and such. The dynamic range within Autumn photography can be gigantic at times and by underexposing, this allows me to retain those highlights. When doing this the darks naturally will be darker so using a low ISO is essential which later doesn't introduce a lot of noise into the image when I am editing it in post work. By using a "sunset" white balance, the images come out very gold. Some may like their images looking like that, some may hate it, however it ensures that the saturation is generally dead on.

In postwork inside Lightroom, I will generally go ahead and just the white balance, finding the whitest point and selecting that. From there I can make adjustments and fine tune the temperature of the scene. Using the Luminance controls, I will then go in and fine tune the highlights to give the image a certain degree of "glow" in fine areas. After that I will adjust the curves and levels accordingly.

Down below is a Lightroom screen cap of the same image side by side. (it isn't finished yet and is a work in progress) It compares what I have in the camera to how I adjusted it mentioning the techniques above. I hope this will help some of you and make you think about your cameras settings this Fall.
---John 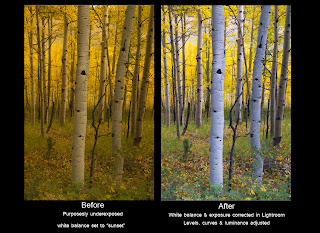 Posted by The jdebordphoto.com Photoblog at 8:32 AM 6 comments:

Each and every year we get together photographers from near and far to experience Colorado in all of it's Autumn glory and this year once again we are doing the same! The cost is free and if you want to learn more about photography, we invite you to join us.

For this year we are mixing it up some with doing 1/2 days instead of all day long. From roughly 11am onwards, you will be your own to wander around Rocky Mountain National park and it's surrounding areas. This makes it easier on us and you as well.

The dates for this years meetup are as follows;

Friday, Septemeber 28th
630am -- Meet on the shores of Lake Estes. http://goo.gl/maps/zQdpW Geo coordinates are 40.376418,-105.503399 roughly. Look for people with tripods set up and for a green Jeep Wrangler (John Sperry's Jeep) We will photograph the sunrise here and hopefully get lucky photographing Elk as they cross the lake. Afterwards, we will swing into Moraine Valley in Rocky Mountain National Park to photograph the Elk rut. We have to be in the area early as possible due to road construction along Bear Lake Rd. The road is technically closed from 9am-4pm however once you are in, you are in and can leave. You can not however re-enter until after 4pm when the road reopens again. We will also photograph the Aspen cages deeper in Moraine Valley.

Saturday September 29th
630am ---Meet on the shores of Brainard Lake. http://goo.gl/maps/1iY4E Geo coordinates 40.078209,-105.572426 We will photograph the sunrise here and explore the area as well. The Moose here have been very active. There is an entrance fee of $9 into the area unless you have a federal recreation pass. The whole area along here is known as the "Peak To Peak" highway and is draped in full Autumn color with gigantic Aspen stands, we will explore & photograph the area. From here, depending on the time, we will head over to Rocky Mountain National Park.

Sunday September 30th
630am --- We will meet in Moraine Valley in Rocky Mountain National Park specifically here http://goo.gl/maps/1Zwxt along Moraine Rd where it meets Bear Lake Rd. Just remember, along Moraine Rd, not along Bear Lake Rd. We will photograph the sunrise and the Elk rut from here and afterwards we will head over to the Horse Park area of RMNP and into the area of the Alluvial Fan and Endo Valley areas to photograph the Aspen cages.

We look forward to seeing and meeting you this Fall!
---John 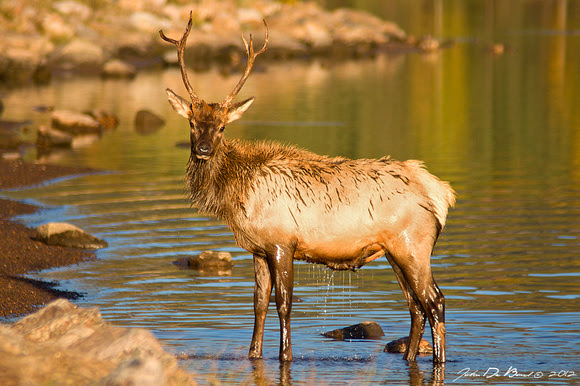 Posted by The jdebordphoto.com Photoblog at 8:26 AM 5 comments: